Yesterday I had some friends over, as usual, and I made boeuf bourguignon, a dish Julia Child once described as one of the most delicious beef dishes concocted by man. And I couldn't agree more.

I used Julia Child's recipe and I love how its written with such great care and attention to details. And I think that's the secret; as cliché as it sounds, however true, you've got to put that extra special ingredients when cooking: love and passion; and that what makes any good dish, GREAT.

The well-known French beef stew was served with boiled new potatoes and slices of country bread, toasted and rubbed with garlic clove.

For dessert, I made ultimate fruit meringue with vanilla cream, hazelnuts and caramel, served on a big serving board and all we needed was spoons. yum... 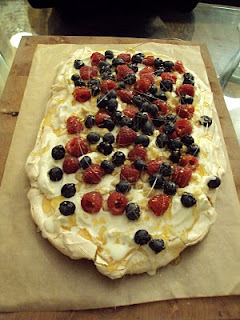 ps. Adam F, Adam O and Meg, thanks for the company. To keep with the French theme, I think we should have duck a l'orange next time. ;)

On Saturday, my new Le Creuset pot made its début with melt-in-you-mouth shin stew. And it's true, the meat literally melts in your mouth. Yum... Yes, the stew takes about a little over three hours to cook, but the thing with slow-cooking is there isn't a lot of work involve; that's if you define 'work' as tipping things to the pot and let the oven do the rest.

Sunday was squid day. I bought whole squid and cleaned them myself for the first time with the instruction from the book. It's not hard at all and very rewarding. I used some of the squid to make Jamie's favourte crunchy squid with lime and chilli mayonnaise. YUM! My friend even said that it's better than the one we had at Jamie's restaurant. I was well chuffed!
And the rest of the squid was made into super squid linguine...

Pudding was coconut, banana and passion fruit pavlova. It was light and refreshing and delicious!

Also went to the cinema yesterday to watch Avatar and If you have not seen the film, go and see it now. I'm telling you it's awesome!

If ask, 'what is your favourite way to eat white cabbage?', As on this afternoon I'd answer, braised with bacon and thyme. I had it for lunch today and it's exceptional. The addition of butter and olive oil at the end of the cooking rounds up the whole dish to yummy perfection.

Do think about it, when a dish is so delicious and you wonder "what in the world is in it?", the answer will be one of the following: butter, bacon, butter, olive oil and butter. Any recipes that start with a good amount of butter, you just know that it's gonna be delicious.

Yes, I know that it's all fat, but hey, let's live a little. Everything in moderation is allowed.

Made a batch of fifteen chocolate brownies this morning; and guess what, the first thing in the ingredient list is a whole block of butter... yum!
Posted by Unknown at Thursday, January 14, 2010 2 comments:

For dinner today I made another pork chops with a side of watercress salad with Japanese dressing. I also made superb sweet and sour squash which was just YUM and buttered peas with crunchy bacon, and what's not to love, sweet peas with crunchy salty bacon, bacon fat and butter. Super Yum.

I saw some pictures of my dream kitchen whilst helping my sister with her 'interior design' article earlier. Man, I wish I have all the money or win the lottery. I could sell a kidney, half a liver, a lung and an eyeball and still can't afford it.
Well, but you never know. Maybe someday...

I made Jamie's Greek Salad tonight. After all of the heavy eating the past few days, a simple salad of lettuce, tomatoes, olives, feta cheese, shallots, oregano, avocado and lemon dressing is what I need.

The addition of sliced avocado to the salad may not be authentic, but it just works, as Jamie said; and I couldn't agree more.

I haven't had avocado for a long time and I can't remember why... they're just delicious.

A friend asked me today if I have a new year's resolution, and I said I didn't make any this year. You know what, I'm gonna make one now: to eat more avocado.
Posted by Unknown at Wednesday, January 06, 2010 No comments:

For a joyful new year

I was in London/Oxford the past few days celebrating the new year with some friends. Great fun. One of the highlights of the trip for me and the main reason for the trip was watching the fireworks across from the London Eye on New Year's Eve. I've seen it three times in the past five years and the show just got better and better, plus who doesn't like fireworks.

In Oxford, we went to Jamie's Italian and the food was out this world. Yum! I had the crispy squid, crispy polenta chips with parmesan and orange bellini to snack; and then my favourite, truffle tagliatelle for starter; I had the chicken cooked under a brick for my main; and two desserts, an affogato and a slice of the creamiest lemon ricotta cheesecake. I was on my greedy mode but I don't care. As Mae West said "too much of a good thing can be wonderful" and I live by that.

We all got back yesterday, almost missed the train, but we made it! Stupid Piccadilly line! Well, it's probably our fault for not reading the notice board, but it felt better blaming it on something else...

This evening was spent with dear friends watching our new favourite TV show 'GLEE'. It's awesome and I think everyone should watch it when the show starts in the UK next Monday on E4. I just finished the first season and cannot wait for the next one (I bought the episodes from US itunes, nothing illegal). The show reminded me of my high school years. I wasn't in the glee club, but I did sing with the Chamber and Men's Choir; and I had the greatest times singing and performing with them.

the GLEE marathon was accompanied with a plateful of roasted cranberry and sweet chilli chicken wings and a batch of fifteen chocolate brownies. Good times!

Going back to work and gym tomorrow.
Posted by Unknown at Monday, January 04, 2010 3 comments: 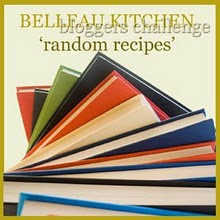 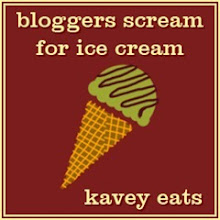